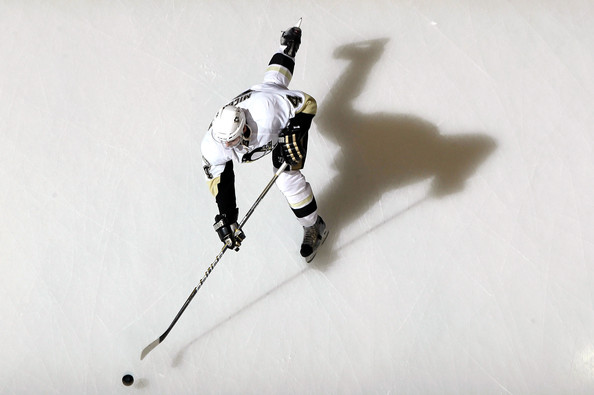 For those of you who know me, even remotely well, you know that Zbynek Michalek is my favorite player in the NHL. Not just my favorite Penguins player, but my overall favorite player in the entire NHL. I feel the need to address this notion of being a complete and total fanboy for no. 4, as it will be difficult to take a purely objective view of his play and what he brings to the team. I am going to try, but you may have to excuse some fanboy squealing.

When July 1, 2010 rolled around I don’t remember any people other than myself and one or two others banging the drum that Shero needed to sign a defenseman from the Phoenix Coyotes named “Zbynek Michalek.” Everyone recognized the last name because of Milan Michalek, currently a forward for the Ottawa Senators, known for scoring at least one unreal goal per season against the Pens. As a Western Conference player in a market not known for TV exposure, many Pens fans had no idea who or what a “Zbynek Michalek” was.

As the season began everyone was quick to write off both Michalek and Martin as busts because of spending $9M combined on the two. While I agree that the initial sticker shock is high, it really is a bargain when one considers the deals that defensmen got on the open market THIS July. Christian Ehrhoff was signed by the Buffalo Sabres to a 10-year, front loaded contract with an annual cap hit of $4M. While I understand the differences in the game being played by Ehrhoff and Michalek, the money comparison is…wow. If you really want to have a laugh, look at the contract that James Wisniewski was signed to by the Columbus Blue Jackets. 6 years at $5.5M per year. The talking heads in Pittsburgh have crowed that Paul Martin is a bust and overpaid (I completely and totally disagree, but that’s for a later post). Wisniewski finished the season as a -14 all while having recorded 51 points. Let that sink in for a minute. He finished a -14 while recording 51 points (only 10 goals). While Wis may be able to help CBJ’s PP (he did post 29 points on the PP last season), is it worth 5+ million?

As mentioned, I understand the differences in the games and responsibilities of the players are different. If one simply looks at the +/- rating of a player or a point total it can be grossly misleading. Michalek is a prime example, as his career +/- rating is -22, but you can clearly see where the numbers become skewed. -20 and -13 seasons with Phoenix will certainly move the numbers in that direction. As a stay-at-home defensive d-man, though, it’s respectable to hover around neutral +/- most seasons. For the sake of comparison, Brooks Orpik’s career +/- is a -1, and he’s played most of his career with guys like Crosby, Malkin, and Fleury, all of whom have a HUGE impact on +/- rating. Now that some comparisons have been made and my fandom has been brought to light, let’s take a look at the season of “Big Z,” Zbynek Michalek.

Much like with Mr. Cooke, the stats do not tell the whole story. Michalek was hurt in the 3rd game of the season against the New Jersey Devils and missed substantial-but-not-season-crippling time. In his first three games as a Penguin, the Pens went 1-2, both losses coming when Z was a minus player. The lone victory came against the Devils and Michalek finished as a neutral in +/-, but only played 7 minutes and change. Z returned to action a few weeks later against the Dallas Stars, where he also was a minus player in a losing effort (the only reason that game is remembered is because of a certain Sidney Crosby getting into a fight with a certain Matt Niskanen). From here on out, it no longer became a coincidence that Michalek being a minus player typically translated into a Penguins loss.

After returning from injury the Pens records W/ Michalek in the line-up:

When combined, when Michalek is neutral or a plus player, the Pens record was 37-13. I’m glossing over the OT records for the sake of simplicity. I’m just going straight win-loss, not factoring in loser points for the team. It is hard to deny the value of a player like Michalek, even though he doesn’t show up on the score sheet regularly. For the chattering class, though, it is easy to overlook how important players like Michalek are because they don’t put up James Wisniewski or Kris Letang like numbers on offense. With a guy like Michalek, it becomes difficult to review them outside of +/- rating, because these types of players do not put up huge offensive numbers, and in the age of Youtube there aren’t many highlight videos of shot blocking and boxing out opposition.

Obviously Michalek is integral as a shut-down defenseman. He is placed against the opposing team’s top scorers regularly and he and mate Paul Martin have done an extraordinary job of keeping those scorers in check and keeping Fleury from facing too many primo scoring chances. That said, when there has been a breakdown, both Michalek and Martin have done excellent jobs of recovering and helping out Fleury and/or the forwards who were back in the zone to help. We all remember only too well these moments from the game against the Kings this past season when Michalek saved the team not once but twice in the first period.

In the first case you can see Letang take his man, but nobody was covering Justin Williams. Michalek took away the cross crease play and moved in as Fleury moved out, saving a goal with some absolutely unreal stickwork. In the second play, well, Bob Errey does a fine job of explaining how Michalek played it perfectly. He stuck with the Kings player and prevented him from making a play by separating him from the puck then, either by luck or skill (or both, as it would seem with great players), cleared it from the crease with some help by Vitale showing some hustle. Everyone wet their pants (self included) when Scuderi made a play like that (granted, the stakes were a little higher then), but everyone just kinda goes catatonic when guys who didn’t grow up on the Pens farm do it.

In pure defensive stats, Michalek ranked 27th in the NHL in shot blocking, with 149 shots blocked,  had 56 hits, and 14 takeaways. Outside of shotblocking, the stats do not stand out as a killer or league leader, but that isn’t necessarily a bad thing. Being an all around defensive player is what is needed for your top-4.

Zbynek certainly had an interesting year on special teams, too. He was originally never planned to be used on the power play, but as the season went on and the injuries mounted, he became one of the steady hands on the PP, even scoring a PP goal and netting 3 PPA. More importantly, Michalek was a leader on the penalty kill, averaging 3:46 of PK time each game. I feel this would be an opportune time to mention that the Pens finished the season no. 1 overall in PK with 86.1% success rate of killing penalties. For those playing the home game, that is a staggering statistic. It becomes even more terrifying when you realize the Pens were assessed the most penalties in the NHL with 480. The Pens were assessed 374 minor penalties, 74 major penalties, 13 misconducts, 10 game misconducts, a 1 match penalty. All combined for a total of 1388 penalty minutes. The Pens averaged 16.9 minutes of PK time per game.

Let all of those stats sink in for a few minutes. Really. Go get a glass of water, maybe tend to your garden or play with your dog or cat. Think about all the penalties and the fact that the Pens lead the NHL in PK percentage. Even my mind is blown, and I saw every single game.

Allow me to say that I don’t want to discount the efforts of other penalty killers. Craig Adams, Max Talbot, Brooks Orpik, Paul Martin, Kris Letang, Pascal Dupuis, Matt Cooke, and any others I’ve forgotten and/or helped pitch in all worked to create such an absolutely insane penalty kill unit. Of course, it could all be for naught, too, had Marc-Andre Fleury and Brent Johnson not been completely insane between the pipes for the majority of the year, either.

I could go into each category, but you will likely tune out, if you have not done so already, by discussing the point production and ratings against each team. Much like Cooke, there is no one team that Michalek excelled against. He played well against just about everyone. Shockingly, his worst numbers came against Montreal and Carolina. Not exactly two juggernauts of offense or skill. Sometimes there are just teams that have your number. Hopefully those things get fixed next year.

I think it is clear just how important Michalek has become to the success of the team. He may not light the lamp too often or lay out too many hits (both of which I expect to see an uptick in next year), but he is a calm, stable presence on the blueline that is sadly undervalued. There is also a clear correlation between his play and +/- rating and the success of the team. He isn’t allowing much to get behind him or his goaltender and he’s allowing the forwards to do their work. In the entire season there was only one game in which Michalek was a plus player (+1) and the team lost – 2/23 vs San Jose Sharks, and even in defeat they managed to salvage a loser point by going to OT.

What to expect out of Zbynek next year? Well, it’s hard to say. Offensively, I do think he will become more involved, both getting a little time on the PP as well as being more certain of his shot and having guys like Malkin and Crosby around regularly to take some unreal first passes out of the zone. Defensively? I really do not know what more you can ask from him that he did not show us this season.

Projected stats (and like Cooke, these are completely a gut feeling, not basing this off any scientific model):

I say expect more of the same from Zybnek with hopefully a little more offense, as he does have an amazing bomb from the point, and hopefully a little more using his size. I expect the shot blocking to remain in the ~150 range, but expect to see the hits go north of 60. Likewise, I expect to see the takeaways tick up toward 20. Not huge improvements, but enough that the overall play will improve above and beyond what I already believe to be a grossly underrated defensive playmaker.